Another blow to Iran’s navy as largest ship catches fire, sinks this morning

It is unclear whether the fire was accidental, but it comes amid constant tension in the Arabian waterways that has steadily increased in the last several years with attacks on both Iranian ships and Israeli ships. 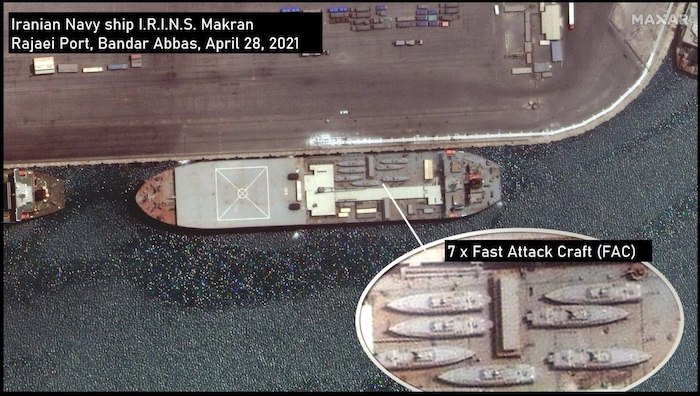 Iran’s largest naval vessel caught fire early this morning and sank in the Gulf of Oman at the port of Jask in southern Iran, Iranian state media confirmed today.

It is unclear whether the fire was accidental, but it comes amid constant tension in the Arabian waterways that has steadily increased in the last several years with attacks on both Iranian ships and Israeli ships.

“According to the public relations of the second maritime area of Jask, despite 20 hours of all-out efforts and the use of maritime relief facilities, due to the spread of fire in various parts, the rescue operation of Kharg training support vessel was ineffective and the vessel sank,” the Tasnim news agency said today.

No one was injured as 400 crew members evacuated the navy training vessel, which caught fire late Tuesday night before being engulfed in flames and sinking this morning.

Fire has broken out at Iranian Army’s Kharg vessel. No casualties so far.
Telegram channel affiliated with Iranian Navy has denied rumors that it was bound for Venezuela, saying it was supposed to depart for Russia along with Alborz vessel, but the mission is now cancelled. pic.twitter.com/wczYtKBRXX

The loss of the Kharg is a major blow for the Iranian navy. The Iranians lost a ship in 2020 which was struck by a missile in a training accident killing 19 and wounding 15 and, in 2018, another Iranian vessel sank in the Caspian Sea.

In April, Israeli forces were responsible for striking an Iranian ship in the Red Sea, according to a report in The New York Times. In February, an Israeli-owned cargo ship, Helios Ray, was hit by a mysterious explosion in the Gulf of Oman and badly damaged on Friday afternoon.

The sinking of the Kharg comes as newly appointed Mossad director David Barnea vowed on Tuesday that the Iranian nuclear “program will continue feeling Mossad’s might.”

“We are well acquainted with the nuclear program and its various components, we know personally the factors that operate in it and also the forces that drive them,” he said, according to an article in Ynet news.

“The agreement with world powers that is taking shape only reinforces the sense of isolation in which we find ourselves on this issue,” Barnea said. “I say it clearly – no, we do not intend to act according to the majority opinion since this majority will not bear the consequences for the erroneous assessment of this threat.”

“Under the protection of the agreement and without it, through lies and concealment of the truth, Iran constantly advancing toward a weapons of mass destruction production program.”

At the same ceremony welcoming Barnea who replaces former Mossad chief Yossi Cohen, Prime Minister Benjamin Netanyahu reiterated that Israel will do everything in its power to prevent a nuclear Iran – even at the expense of its relationship with the United States.