EXCLUSIVE INTERVIEW: As opposition to Iranian regime has risen among its citizens, salvations have skyrocketed across the nation

Dr. Hormoz Shariat tells ALL ARAB NEWS that new Iranian president was handpicked by Supreme Leader in order to quash opposition, but Iranians are hungrier for the Gospel than he has ever seen 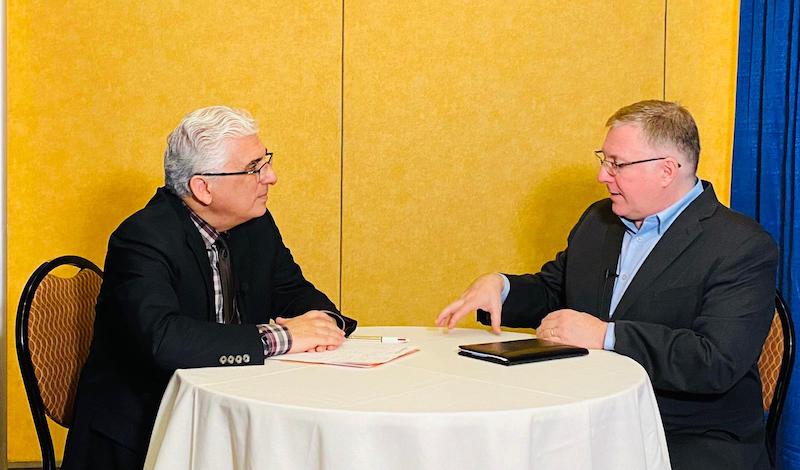 Iranian Supreme Leader Ali Khamenei rigged the recent elections to install Ebrahim Raisi as president for one major purpose: to warn citizens who are disgruntled with the regime and angry about their desperate economic predicament to shut up or be killed.

“He’s a very hardliner, of course, and he has a track record of violence,” Dr. Hormoz Shariat said in an interview with ALL ARAB NEWS. “They put somebody like him in, who has no problem killing people on the streets. He has that track record – if something happens, he will murder. There was no appeasing of people, helping people, promising.”

Shariat – an Iranian Shia Muslim who converted to Christianity – said the government needed someone at the helm who has no qualms crushing the opposition, and Raisi has proven that he has no problem doing so.

Currently at the National Religious Broadcasters Convention in Dallas, ALL ARAB NEWS Editor-in-Chief Joel C. Rosenberg spoke with Shariat – an influential Iranian evangelist and the founder of Iran Alive Ministries and a 24/7/365 satellite TV network – to get his insights on the new regime.

At a critical time when the United States is courting Iran to revive the nuclear deal, Rosenberg asked Shariat why the Supreme Leader would choose a candidate who is a known hardliner – the “Hangman of Tehran” – and not try to send a message of moderation to the West.

“The last two years, the government has been in real trouble. They lost their support. The government officials have been losing hope, they’ve been living in fear that maybe our days are numbered, maybe. And some of them have been planning to leave Iran if something happens,” Shariat said.

Since 1,500 protestors were murdered during uprisings two years ago, tensions toward the government have been on the rise. Shariat said the election of Raisi was meant to reassure the political leaders in Iran that the new government would be unafraid to quash opposition.

“So with him, it’s a change of policy, of giving encouragement to their own group: ‘Everything is okay, stay, don’t leave. We are in power,’” Shariat said.

Despite this unrest – or because of it – more and more Iranians are hearing the Gospel and getting saved.

Shariat – who Rosenberg describes as the “Billy Graham of Iran” for his vast evangelical outreach to the Farsi-speaking world – said that in the last year alone, 29% of all salvations his ministry recorded in 20 years on the air were reported.

And there could be many more they are unaware of, Shariat said.

“Acceleration. That’s the thing. Iran has been open … to the Gospel,” he said. “It’s hard for people to contact us. So we only get a percentage of the real numbers who contact us – report to us – that they have come to Christ or they pray with us to come to Christ. The number jumped 10 to 20 times last year.”

Shariat asked believers to pray that God will send him the right staff who are anointed, intelligent and can form and execute a strategy to continue this work “because the fields are open.” Here is a transcript of the interview from the National Religious Broadcasters Convention this week:

ROSENBERG: It’s an honor to be with Dr. Hormoz Shariat here at the National Religious Broadcasters Convention. Hormoz, you’ve had a dramatic development in recent days in Iran. I don’t know whether to really call it an election because these things are pretty much rigged, aren’t they?

ROSENBERG: But tell me, who is the newly-elected president of Iran and what do we need to know about him?

SHARIAT: He’s a very hardliner, of course, and he has a track record of violence. Even in the 1980s, in 1987, when there was a mass execution of prisoners. Some people say 15,000, some put it to 30,000 people that were killed in a matter of few days, a few weeks. Prisoners, they decided – Khomeini decided – let’s get rid of him. And (Raisi) was one of them – there were three who did that, and he was one of them. So that’s his background.

ROSENBERG: His name is Ebrahim Raisi.

SHARIAT: He was a chief justice the last few years. And you saw violence … violence on the streets of Iran the last few years. So what’s happening with him is that the government knows that they have lost their credibility, the support of people, not just the intellectuals, even the low income people who were traditionally just supportive of the government, they’re losing them also. Why? Because the economy is not good.

ROSENBERG: And the economy is not good, primarily because of the economic sanctions and the low price of oil?

SHARIAT: It never got to the people, but it revealed the corruption that was there. So the people are fed up with the government. Even the government, they confess that not many people showed up for the election. The figure, they put it at 30%, 40%, but the real figure is 5% to 10% of the people who are eligible that voted.

ROSENBERG: Because there obviously is no candidate on the ballot that’s against the government. They’re hand-picked by the supreme leader.

ROSENBERG: Why would the supreme leader not have chosen somebody who is more smiling and gentle and maybe make the regime look more moderate to the outside world? Why pick a murderer?

SHARIAT: Well, because they have done it for the last 25, 30 years. And the people of Iran are sick and tired of that script. And they have put a hardliner and a moderate and a little bit more freedom and less freedom. I say on my program, that the difference between the moderate and the hardliners is how much of your hair can show. That’s the only difference. With the moderate, you can show more hair for the women. So not much difference. And people have seen the game they have been playing – some years very hard and then a little bit of more freedom and then hard again. So people are sick and tired of that game and they’re saying we’re not going to support the government. So that type of approach is more hardline than a moderate, and it doesn’t work.

ROSENBERG: But going back to your first point, do you feel that the supreme leader is trying to send a message to the people of Iran that if you get out of line, if you protest against the government, we will kill you?

SHARIAT: Right. Since the murders, about two years ago, of 1,500 young people who were killed on the streets. And these were people of low income protesting, not politically, but for finances. You know, we don’t have the jobs, we don’t have the income. And when they were killed, the government lost the great support they had with the low-income people in Iran. So, now the last two years, the government has been in real trouble. They lost their support. The government officials have been losing hope, they’ve been living in fear that maybe our days are numbered, maybe. And some of them have been planning to leave Iran if something happens…

ROSENBERG:  Leaders inside the regime?

SHARIAT: …Inside the regime. So with him, it’s a change of policy of giving encouragement to their own group. Everything is okay. Stay. Don’t leave. We are in power. So, they put somebody like him that has no problem killing people on the streets. And he has that track record. And if something happens, he will murder. There was no appeasing of people, helping people, promising. They have tried all of that and it hasn’t worked. So with him, the government officials and those who support him, which is 5% to 10% of the population, now suddenly they have hope. They were so stressed out. What’s going to happen to us? Maybe we should leave Iran now? Now, everything is in control, stay. We are still in power. We still can control.

ROSENBERG: Just for time’s sake – there’s so much more to talk to you about, but let’s just close with what’s happening spiritually inside Iran. And how can Christians be praying for the people of Iran in such a dark time?

SHARIAT: Acceleration. That’s the thing. Everything happening is actually… Iran has been open … Iranian people to the gospel. But since the beginning of last year, the number of salvations … it’s hard for people to contact us. So we only get a percentage of the real numbers who contact us – report to us – that they have come to Christ or they pray with us to come to Christ. The number jumped 10 to 20 times last year. And actually this year is even more. The number of salvations last year, and we’ve been on the air for almost 20 years, 29% of all salvations came last year, just in one year.

ROSENBERG: Really, of all the salvations you’ve ever seen?

SHARIAT: Yeah. I mean, it’s hard to contact us. It’s dangerous to contact us. And even if it wasn’t, you know, like the 10 lepers that Jesus healed, one came back and reported. So, the numbers are much higher. And why higher? Because now a new segment of the society that was not open to the gospel, these are more religious, common people – suddenly they lost hope in Islam. Losing hope in the government is the same as Islam; and if they lose hope in the government, it is losing hope in Islam. So suddenly they have become open to other messages, including the Gospel.

ROSENBERG:  So how can we pray for you, Hormoz? And how do we pray for the people of Iran right now and for the church in Iran?

SHARIAT: This is a great opportunity. My prayer right now is, “God, send me the right people right now.” Finance is, of course, always needed, but more than finances, “God, would you send me anointed, intelligent people who can form a strategy and execute that strategy? Because the fields are open.”

ROSENBERG: You are talking about more staff for Iran Alive Ministries?

SHARIAT: More staff and the right staff. Just the right one. My prayer and fasting has been just that. God, we need the right people to do your work. So, I appreciate that. Of course, the prayer and support. We are facing the Prince of Persia and the prayer support is always important. We have organized a great prayer support in the last couple of years, and I’m very happy. I think that’s one of the reasons we see so many salvations, because we are winning the war in the heavenlies first. Then, we – the captives – set free.

ROSENBERG: Well, it’s a great message to communicate here at National Religious Broadcasters and something that we’ll be communicating through ALL ISRAEL NEWS and ALL ARAB NEWS. Hormoz Shariat, it’s a great delight, my friend. You’re a great friend and a great champion of the gospel, and I appreciate it.

ROSENBERG: Thank you so much.