Babylon Rising? War-torn Iraq is rebuilding and Pope Francis is heading there to see it for himself, encourage Christian community

The Pope is even planning a special visit to Ur of the Chaldees, the birthplace of Abraham, father of Judeo-Christian civilization 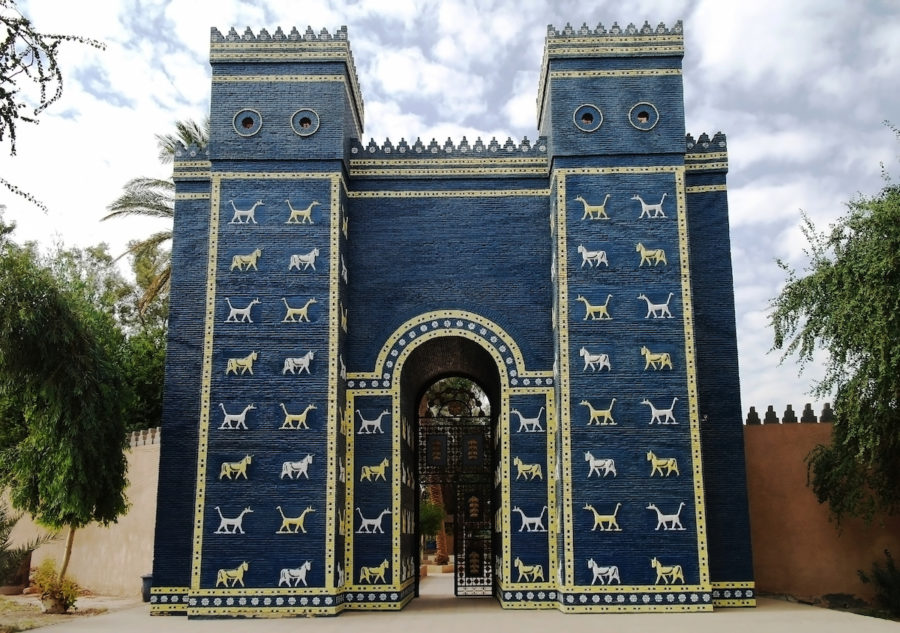 A reconstruction of the Ishtar Gate at the ruins of Babylon, near modern Al-Ḥillah, Iraq. (Photo: Shutterstock)

Ancient biblical prophecies in both the Old and the New Testaments indicate Iraq will become the wealthiest and most powerful country in the world in the “End of Days.”

And the most evil.

Iraq, of course, is a modern name and is not a name ever used in the Bible.

In the New Testament, the Book of Revelation also speaks of the future of Babylon.

Some Bible scholars believe Babylon is beginning to rise today.

After Saddam Hussein’s reign of terror, the American-led war of liberation, and the subsequent bloody revolutions and insurrections by radical Islamist jihadists – including the rise and fall of the ISIS caliphate – Iraq is hardly an economic power or military threat to any of its neighbors.

But Iraqi officials are determined to rebuild the entire country, as well as the literal ancient ruins of the once-glorious city of Babylon.

Saddam actually began rebuilding the city of Babylon in the 1980s, but ran out of money during his war with Iraq.

Iraqi officials are back at it, and have persuaded the United Nations to name Babylon a UNESCO World Heritage Site.

Archaeological site of Ur of the Chaldees in modern Iraq (Photo: screenshot Reuters video)

Now, in a bid to draw tourists and tourist-dollars to Iraq, officials in Baghdad are preparing to roll out the red carpet for Pope Francis in March.

The Pope will arrive in Iraq on March 5 and spend four days traveling to multiple cities.

The Pope’s mission, however, isn’t to encourage tourism to Iraq.

He wants to encourage the country’s dwindling and struggling Christian community.

Twenty years ago, Pew Research Center says there were 1.4 million professing Christians in Iraq, but today there are only about 270,000.

Many were killed. Many more fled for their lives.

“We must work to ensure that the Christian presence in these lands continue to be what it has always been: a sign of peace, progress, development and reconciliation between peoples,” Pope Francis said in December.

Still, the leader of the Roman Catholic Church is intrigued to see both the ancient history of the country that plays such a large role in the Bible, as well as the growth and construction underway today. As part of his plans, aides say Francis will visit Ur of the Chaldees, the birthplace of Abraham, the father of Judeo-Christian civilization, who is also highly esteemed by Muslims.

“Pope Francis is due to hold an inter-religious prayer service at the ancient Mesopotamian site of Ur when he visits Iraq next week — an event local archeologists hope will draw renewed attention to the place revered as the birthplace of Abraham,” Reuters reports.

“Located about 300 km (200 miles) south of the capital Baghdad, the site comprises a pyramid-style Ziggurat and an adjacent residential complex as well as temples and palaces,” Reuters noted. “It was excavated about 100 years ago by Leonard Woolley, a Briton who recovered treasures rivalling those found in Tutankhamen’s tomb in Egypt.”

“But little work has since been done on one of the world’s oldest cities, where urban dwelling, writing and central state power began.”

Ali Kadhim Ghanim, director of Iraq’s Board for Antiquities and Heritage who specializes in Ur, specifically wants to show the Pope the Ziggurat, a Tower of Babel-like structure that dates back to about 1,900 B.C.

Ghanim says it is believed that “this building, or house, was the house of the prophet Abraham.”

A visit by the Pope, he hopes, will draw international funding – and tourists.

“Not only tourism, but we believe that there will be a Christian pilgrimage season,” Ghanim told Reuters.