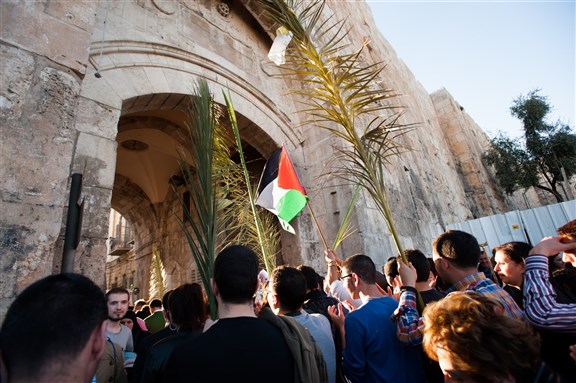 Holy Land Christians affiliated with the Eastern Orthodox church celebrated Palm Sunday amid a tense atmosphere as young Muslims in Jerusalem engaged in violent confrontations with police and attacks on religious Jews.

Since the beginning of Ramadan – the Muslim fasting month – violent confrontations have taken place nightly between Palestinian youth in Jerusalem against police and religious Jews outside the Old City.

During Ramadan, some religious leaders ramp up calls for attacks on Israelis. Recently, one of the most prominent Hamas leaders, Mahmoud al-Zahar, appeared in a video calling on Palestinians to take up arms against Jews and kill them.

Christians in Jerusalem, who make up 2% of the city’s population, have largely avoided the violent events recently and the conflict in general.

Palm Sunday is the seventh Sunday of Lent and the beginning of Holy Week according to the Eastern Orthodox calendar. Church celebrations were limited this week and Christians were awaiting decisions on whether the Palestinian Authority would allow larger gatherings for Easter Sunday with marches led by scouts from the various denominations and large gatherings.

The number of Palestinian Christians in the Holy Land dwindles every year as Christians emigrate due to the economic and political conditions. According to an opinion poll conducted by the Palestinian Center for Policy and Survey Research, another reason for emigration is a lack of religious tolerance in the Palestinian Authority.