Amazing first as Holocaust exhibit premiers in Dubai highlighting Arabs and Muslims who helped save Jews during the Holocaust as well as portions of Anne Frank’s diary, among other items 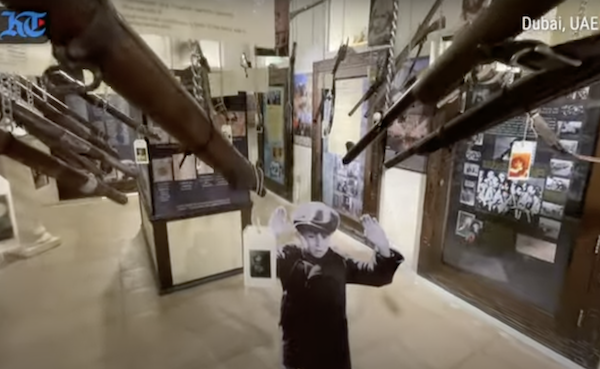 Inside the “We Remember” exhibit at the Crossroads of Civilizations Museum in Dubai (Photo: screenshot)

Amid a spike of anti-Semitism around the world, the Crossroads of Civilizations Museum (CCM) in Dubai celebrated the opening last month of the first exhibit in the Arab world to commemorate the Holocaust.

The exhibit “We Remember” is dedicated to victims of the Holocaust and includes a section dedicated to Muslims who saved Jewish lives during World War II.

Its debut at the CCM marks the ongoing positive shift in attitudes between the UAE and Israel following the Abraham Accords normalization agreements signed last September.

“It is very important to us that we focus on educating people about the tragedies of the Holocaust because education is the antidote to ignorance,” said CCM Founder Ahmed Al Mansoori.

Israel’s current ambassador to the United Arab Emirates, Eitan Na’eh, attended the exhibition, praising the UAE’s initiative to open such an exhibit in light of the rising number of attacks against Jews across the globe.

“We see the ugly face of anti-Semitism rising again in the streets of Europe and elsewhere and then we come here, to an Arab country… and we come to a Holocaust exhibition,” he said.

“Who would have dreamt 70 or 80 years ago that an Israeli ambassador and a German ambassador would sit here together – in an Arab country – visiting a Holocaust remembrance exhibition,” Na’eh marveled.

German ambassador to the UAE, Peter Fischer was also in attendance. During his speech at the opening event, Fischer commended the Arab nation for its policy of tolerance.

“The Holocaust is an eternal mark of shame on my country,” he said. “The way of intolerance is not the right way. It will lead to great suffering, even to catastrophe. Take it from a German.”

Al Mansoori said he believes the timing was right to open a Holocaust exhibition in the region.

“The Holocaust was a crime against humanity. And when you have an event like that, you must separate it from other events. A museum is not a political place, it’s a journey through history,” he said.

A segment of the “We Remember” exhibition celebrates Arabs and Muslims who helped save Jews during the Holocaust, spotlighting the rich history of coexistence between Arabs, Muslims, Christians and Jews during the twentieth century.

“When people talk about the Holocaust and the Arab world,” Al Mansoori said, “there are a lot of different interpretations. We have so many good stories about Arabs and Muslims helping Jews over time, and that’s the positive side people don’t know about that we want to educate them on.”

Senior Rabbi Elie Abadie from the Jewish Council of the Emirates said the exhibit is significant, noting that it’s the first of its kind in the Gulf.

“Although most people in the Middle East know the Holocaust took place, they do not speak or learn about it as much. Now, the region is opening up and this exhibition gives tribute to what has happened and demonstrates the public recognition of history.”

Rabbi Abadie added that Hitler’s ideologies had infiltrated the Gulf in the 1940s as well, stating that Middle Eastern countries were not immune to the Nazi-inspired teachings where Arab Jews in Libya, Tunisia and Iraq were persecuted.

“We Remember” is open to the public and showcases unique items such as the facsimile of a Jewish prayer book from Germany, saved from Kristallnacht, a pogrom against Jews during World War II.

The exhibit also pays tribute to Albanian Jews rescued by Albanian Muslims and spotlights Mohammed Helmy, an Egyptian doctor living in Berlin who provided medical assistance and a refuge for Jews in his own cabin during the war.

Turkish diplomat Selahattin Ulkumen – acknowledged in 1989 as a Righteous Among The Nations – is also featured. Ulkumen is recognized for providing safe passage to Turkish Jews in 1944 when the Gestapo intended to transport them to Auschwitz.

Famous testimonies are featured at the CCM’s exhibit, such as portions of Anne Frank’s diary and other intimate perspectives from those who lived during the time, sharing the impact that the Holocaust had upon them and their families.

Established in 2012, the CCM represents the UAE’s values of openness and multiculturalism, and its collection on display seeks to honor civilizations across the Gulf.

Mansoori stated the CCM’s objective is to “highlight the past that united the history of humanity prior to any political agreements, in order to provide an opportunity for future generations to see the benefit, the beauty and positivity in other cultures and civilizations – instilling the essence of plurality, diversity and multiculturalism.”