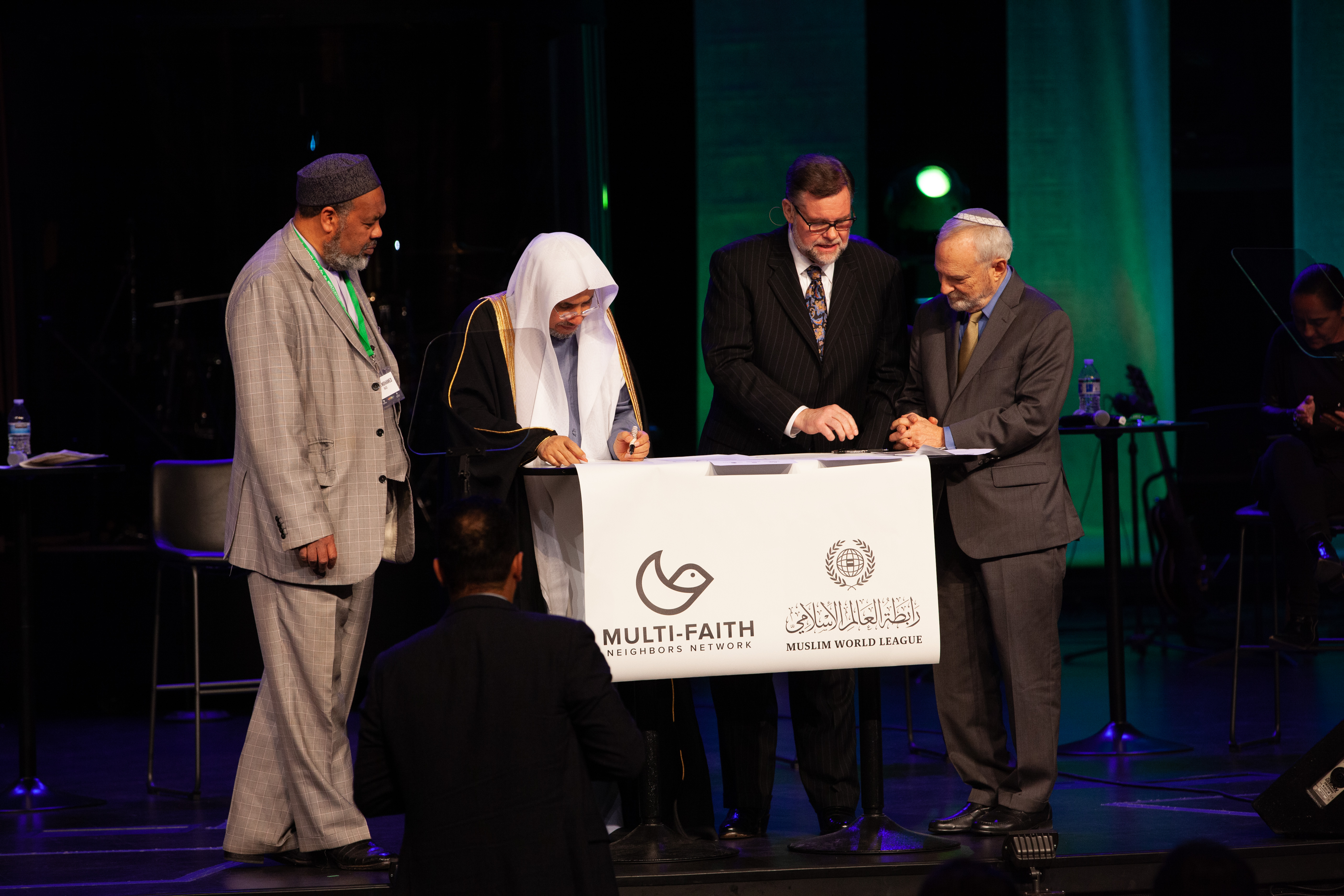 A group of faith representatives, including Rabbi Saperstein, Imam Magid and Pastor Roberts, sign a letter of intent in support of the Charter of Makkah (Photo courtesy)

KELLER, Texas–Several current and former ambassadors joined hundreds of representative leaders from the three Abrahamic faiths, including well-known Muslim imams, Jewish rabbis and Evangelical pastors to gather together in Dallas, TX and Kansas City, Missouri, this week for the Global Faith Forum, hosted by the Multi-Faith Neighbors Network. Themed “Unlikely,” co-founders and co-hosts, Pastor Bob Roberts and Imam Mohamad Magid, noted the events were designed to cultivate multi-faith relationships and guide the next generation to a more inclusive future.

“This type of gathering has never happened before, especially in the heart of the Bible Belt, but we believe it will be the starting point for change,” said Roberts, who served as program host and convener at Northwood Church in the Dallas suburb of Keller. “Historically, Evangelicals have not been in this conversation. When Jesus said, ‘Blessed are the Peacemakers,’ that doesn’t mean just in our group; He was talking about the public square. Our hope and prayer are this Forum will open dialogue, build relationships and facilitate understanding, peace and unity.”

The night began with songs and prayers from each faith, followed by an address from the newly appointed U.S. Ambassador for International Religious Freedom, Ambassador Rashad Hussain.

“Oftentimes, faith leaders are more effective in doing this work than the government,” Hussain said. “You bring the credibility of knowing your congregations. The most powerful way to build bridges is collaboration between government and civil society.”

H.E. Dr. Mohammad Al-Issa, Secretary General of the Muslim World League (MWL), introduced and gave an overview of the groundbreaking Makkah Declaration, which was conceived and created by the MWL in 2019.

Written by a consensus of more than 1,200 respected Muslim scholars, affirmed by over 5,000 Muslim theologians and approved by Islamic leaders of 139 nations, The Charter of Makkah is considered the most important document of modern Islamic history. It encourages peaceful co-existence and ensures religious diversity and human rights for all people.

“The Charter is much more than just a document; it is a roadmap for how we can reconcile our differences, advance peaceful co-existence and create deep and lasting mutual respect,” His Excellency Al-Issa said. “We are stronger when we are together, and we are unbeatable when we stand united and resolved to cultivate lasting friendships and understanding regardless of race, ethnicity, faith, gender or creed.

“From my travels, I’ve learned that whether I am meeting an evangelical leader or a Jewish person, we share many of the same values,” Al-Issa added. “We have all witnessed the discrimination that many in our communities face, and we also share a commitment to a world where intolerance and injustice has no place in our society. We are fostering a more inclusive and equal world, where no forms of prejudice or bias exists.

“This agreement represents our values-based approach to educate the next generation of leaders and place an importance on teaching them how to engage in constructive dialogue,” Al-Issa concluded. “It sets a new course for the future of humanity and ensures lasting peace and prosperity for all.”

Many of the leaders spoke about the importance of working together to solve global issues that go beyond religion from human trafficking to world hunger.

Another key participant included Rabbi Charlie Cytron-Walker, who experienced proof of concept of the importance of multi-faith relationships and the religious responsibility that comes with religious freedom in the midst of crisis and tragedy. When he and several congregants were held hostage by a Palestinian gunman at nearby Congregation Beth Israel in January, Pastor Bob Roberts joined another local imam and rabbi to work with hostage negotiators and support and care for family members of the hostages.

“We could have experienced no love and no support, but our community and world showed up,” Rabbi Charlie said. “Building relationships is the foundation to understanding the dignity and beauty of our lives.”

“We have to move from isolation to collaboration, based on covenant,” Roberts said, emphasizing that multi-faith means not having to compromise their theology or identity. “The work of God is more important than our platform. What we need are legitimate, God-fearing, moral, prophetic religious leaders, focused on building meaningful bridges with one another.”

At The Church of the Resurrection in Kansas City on March 9, host Pastor Adam Hamilton opined, “Many of us don’t know members of other faiths, and we fear people who are different from ourselves. For Christians, it starts with loving our neighbor, whom Jesus defined as ‘someone different from you.’

“We don’t have to agree on everything to say to one another, ‘We are fellow human beings and my faith enables me to love you,’” Hamilton added. “Many times, when I engage in a conversation with a person of another faith, I come away a better Christian.”

Prior to the first two events, Muslim and Evangelical volunteers joined together to pack approximately 10,000 meals for the underserved in the surrounding DFW community and another 10,000 meals for distribution to the needy throughout greater-Kansas City.

Recognizing the great momentum created by the Global Faith Forum discussions in Dallas and Kansas City, the Multi-Faith Neighbors Network, will hold an additional conference in Washington, D.C. on Sunday, March 13.

“We believe it is vital to continue this important dialogue in communities worldwide,” said Magid, Executive Imam of All Dulles Area Muslim Society (ADAMS) Center in Sterling, Virginia and co-host of these events. “These conversations are critical in building bridges that will stop hate, make peace and facilitate lasting relationships.”

Multi-Faith Neighbors Network (MFNN) was co-founded by Pastor Bob Roberts, Jr., Rabbi David Saperstein and Imam Mohamed Magid to bring together an imam, pastor and rabbi in each local city across America to do good works, spread love to one another and establish resilient communities. MFNN is a grassroots movement built on mutual trust and respect with a vision to equip individual faith leaders, congregations and broader communities to serve as bridge builders and problem solvers. Currently, MFNN has engaged more than 180 congregations working together across disciplines – My Neighbor’s Keeper, Religious Freedom and Multi-Faith Engagement. To learn more about Multi-Faith Neighbors Network, visit https://www.mfnnetwork.com.

Global Faith Forum Unlikely 2022 is the theme for the two-day Global Faith Forum, hosted by Multi-Faith Neighbors Network, taking place on March 6-7, 2022, in Dallas-Fort Worth, Texas, followed by similar events in metro- Kansas City, MO, and metro-Washington, D.C. While this event has previously taken place on a local level, this year is the first-ever national, public gathering of Evangelicals, Jews and Muslims. The Global Faith Forum serves as a safe space for bridge-builders with different religious beliefs to work to establish foundations of understanding and to create unlikely allies among other world religions. For more information visit: https://globalfaithforum.com/.