Hamas used the recent rocket war as a massive fundraiser, and to boost its popularity among Palestinians in both the West Bank and Gaza – new poll finds it has succeeded wildly 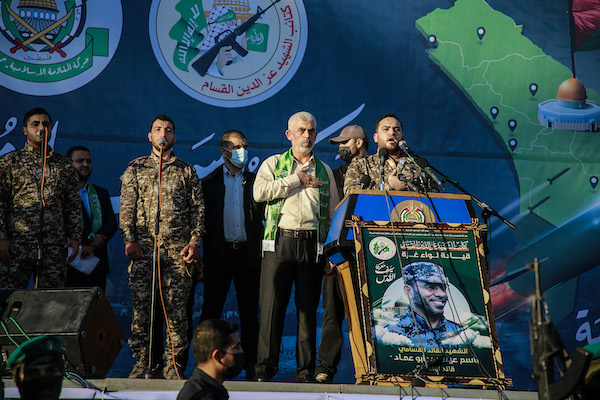 Yahya Sinwar, the leader of Hamas movement in Gaza, gestures on stage during a rally in Gaza City, May 24, 2021. (Photo: Atia Mohammed/Flash90)

It is widely said that a political campaign is war by other means.

Yet Hamas is using war with Israel to win a political campaign against its biggest rival: Palestinian Authority President Mahmoud Abbas.

A new poll finds that Hamas is the new hero of the Palestinians.

Support for the terrorist organization is surging.

Meanwhile, support for Abbas is plunging – most want Abbas to leave office immediately.

And the majority of Palestinians now believe violence – not diplomacy – is the best way to confront Israel.

These are sobering findings of a new poll showing danger ahead for Israel and the peace process.

The professional poll was conducted by the Palestinian Center for Policy and Survey Research (PSR) in the West Bank and the Gaza Strip between June 9 and 12. The total sample size was 1,200 adults interviewed face to face in 120 randomly selected locations. The margin of error was +/-3%.

In January, Abbas announced three rounds of elections in 2021.

This was a miscalculation from the start.

The big question, as we wrote for ALL ARAB NEWS in January, was this: “Will the Hamas terrorist organization – which is an offshoot of the Muslim Brotherhood in Egypt, and which seized full control of the Gaza Strip after Abbas badly mishandled the last round of elections – gain full political control of the West Bank as well?”

Abbas is currently serving the 16th year of his four-year term – having prevented new elections since 2005.

He clearly does not care about democracy, so why bother calling elections now?

By early May, Abbas realized his mistake.

His publicly stated reason for canceling the elections was that Israel would not allow Palestinians living in East Jerusalem to vote. In fact, everyone knows that Abbas could see the handwriting on the wall.

Polls taken earlier this year showed that Abbas and his Fatah party were deeply unpopular in the West Bank, and that support for Hamas was slowly growing.

But Hamas was enraged by Abbas’ decision.

It now seems clear that the rocket war it launched against Israel – along with the riots it fomented on the Temple Mount, in the East Jerusalem neighborhood of Sheikh Jarrah and in mixed Arab-Jewish cities across Israel – was, at its core, a political campaign waged against Abbas.

Hamas used the war as a massive fundraiser.

In this, it appears to have succeeded. The international community has pledged more than $1 billion to rebuild Gaza, and Hamas leaders believe that ultimately much of those funds will run through them helping to strengthen their financial standing, despite the devastation of their military infrastructure due to precision IDF strikes in the last war.

Hamas also used the war to boost its popularity and convince Palestinians that violence – not moderation and diplomacy – is the best way forward.

In this, too, it has wildly succeeded.

The new poll found that: