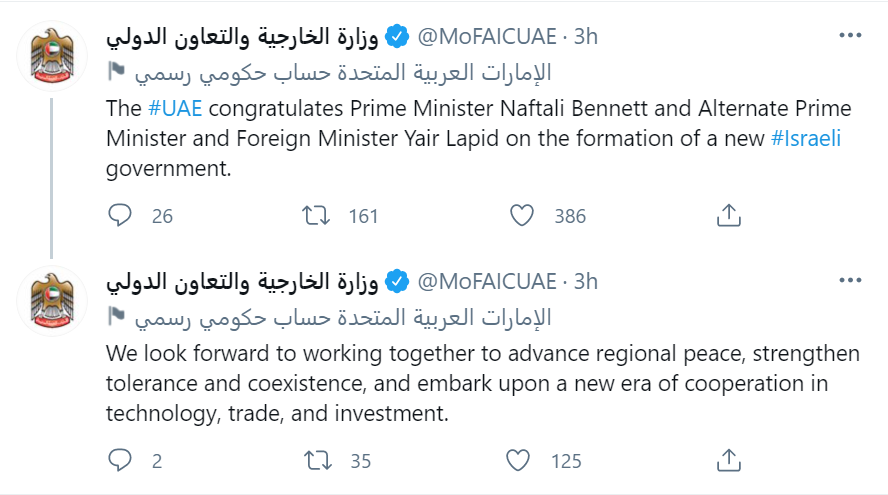 In an historic first, an Arab government congratulated a newly-formed Israeli government, even one led by a right-wing prime minister.

In a second tweet, the UAE government stated: “We look forward to working together to advance regional peace, strengthen tolerance and coexistence, and embark upon a new era of cooperation in technology, trade, and investment.”

At the same time, Arab newspapers across the region published photos and stories about the dramatic change in Israeli politics.

Some papers and websites even published these on their front pages.

The lead headline in The National, the main English-language newspaper in the UAE, this morning was: “New Israeli coalition ousts Netanyahu after parliament votes: New government ends Benjamin Netanyahu’s 12 years as leader.”

The Khaleej Times, also based in the UAE, published a story from Agence France Presse with this headline: “Naftali Bennett sworn in as Israel’s new prime minister.”

“A former defense minister and a high-tech millionaire, Bennett, 49, was due to be sworn in shortly after the vote,” the story noted. “His alliance includes for the first time in Israel’s history a party that represents its 21% Arab minority.”

The influence satellite news network published several other related stories on its website, as well.

The Egyptian Al-Ahram newspaper published an Associated Press story with this headline: “Israel’s new government gets to work after Netanyahu ouster.”

The story emphasized the support the new prime minister was receiving from leaders around the world.

“World leaders have congratulated Bennett on becoming the 13th person to hold the office of Israeli prime minister,” the article reported. “British Prime Minister Boris Johnson congratulated Bennett and Lapid on forming a government, tweeting that ‘this is an exciting time for the UK and Israel to continue working together to advance peace and prosperity for all.’” “Indian Prime Minister Narendra Modi, who shared close ties with Netanyahu, congratulated Bennett in a tweet in Hebrew, saying he ‘looks forward to meeting you and deepening the strategic relations between our countries.’ Modi also voiced his ‘deep recognition’ of Netanyahu’s leadership,” the article noted.

“Yair Lapid, Israel’s new foreign minister and alternate prime minister, spoke with U.S. Secretary of State Antony Blinken and ‘discussed the special relationship between the US and Israel,’ he wrote on Twitter.”

The Daily Star – based in Beirut, Lebanon – actually published three stories on the developments in Israel.

The second headline read: “Netanyahu departure ends ‘one of the worst periods’ of conflict: Palestinian PM,” based on an Agence France Press report. The story – also from Reuters – provided brief profiles of all the major leaders in the new Israeli government, including Mansour Abbas, the head of the Arab Ra’am party.

The Jordan Times had no stories posted on its website on Monday about the change in Israel’s government.