Too many in the media in the West & Middle East are waging war against Israel, moderate Arabs and the Abraham Accords, and we must do a far better job fighting back, senior UAE official tells ALL ARAB NEWS

In an exclusive interview, Dr. Ali Rashid al Nuaimi says “Israel lost the media battle” in recent war with Hamas – he does see signs of hope, says Arabs on social media are turning against Hamas and Islamic Jihad, but insists there is much work to advance peace and regional prosperity 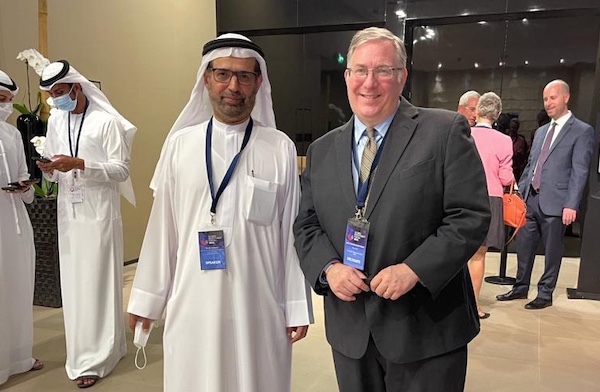 They were trying to blow up the Abraham Accords and stop all efforts in the region to normalize relations between Israel and moderate Arab nations, says Dr. Ali Rashid Al Nuaimi.

And the terrorists were not alone, Nuaimi told me, too many journalists, columnists, producers and Western media outlets in the West and throughout the Middle East are also purposefully hostile to — at times even waging war against — moderates and those who want to make peace, and we must do a far better job fighting back.

Based in Abu Dhabi, the capital of the UAE, Nuaimi is one of the most interesting and important thinkers and media strategists in the region, and a leading expert on Arab and Islamic broadcast, print and social media.

He is chairman of Hedayah, The International Center of Excellence for Countering Violent Extremism.

He is a member of the UAE Federal National Council, and chairman of the Defense Affairs, Interior and Foreign Affairs Committee at the Council.

In these capacities, he has become a trusted and valued advisor to Crown Prince Mohammed bin Zayed al Nayan and other senior Emirati leaders as they have sought to make the UAE the model for peace, prosperity, moderate Islam and regional cooperation.

I first met Nuaimi in October 2018 when the crown prince invited me to bring a delegation of Evangelical leaders from the U.S.

Nuaimi was sitting directly at the crown prince’s right side during our two-hour meeting in the palace.

Nuaimi also invited us to the Hedayah Center where he and his colleagues took several hours to brief us on the vital work the UAE is doing to counter jihadist threats, hate speech and other dangerous and extremist messaging in the media.

We have met numerous times since, here in the UAE, in Egypt and by phone and Zoom.

In 2020, I invited Nuaimi to become a founding member of the ALL ARAB NEWS Advisory Board, and he immediately agreed.

I have come to deeply value his insights and appreciate how committed he is to defeating extremists in the region and truly winning the peace.

On Wednesday, Nuaimi and I spent time together on the sidelines of the Global Investment Forum here in Dubai, a conference co-sponsored by The Jerusalem Post and the Khaleej Times.

Much of our conversation was off the record, so we could talk candidly about current trends in the region.

That said, Nuaimi also graciously agreed to go on the record with some of his thoughts.

Here is a transcript of our conversation, slightly edited for clarity.

JOEL ROSENBERG: I’m sitting here with Dr Ali Rashid al Nuaimi, who is not only a wonderful man, a great soul, but he’s also on the ALL ARAB NEWS advisory board. So, Dr. Ali, it’s great to be here in Dubai and to see you again.

Talk to us about the effect of the war between Hamas, Islamic Jihad and Israel – yes, it was a war between Israel and terrorists, but it was also a direct assault on the Abraham Accords. That’s what the Hamas leader said. That’s what Iran said. What did you see in terms of social media? What is the narrative like here in the Gulf and specifically here in the United Arab Emirates?

ALI RASHID AL NUAIMI: I hope that this will be the last war that we have in our region between the Israelis and the Palestinians.

This is why I think it is important to realize that you might win a war on the military and security side, but it’s very important to look at the whole picture. You have to win the war in the media, too. Because even if you win the war on the ground and you lose the media battle, you have actually lost in the end.

And this is why I feel that we have to create a narrative to gain the hearts and the minds of the Palestinians and the Arab world that convinces people that peace and the Abraham Accords are the answer. We have to work hard on that.

You know, I mentioned it to some Israeli friends – I think Israel lost the media battle, especially in terms of Western media.

I mentioned to one of our Israeli friends, I told him, “Look, in the media, especially in the Arab world, but also in the West, they are talking about Gaza as if Gaza is occupied by the Israelis. But you didn’t respond to that and say, ‘Well, we are not in Gaza, that is occupied by Hamas. The Palestinian people in Gaza are suffering because of the occupation of Hamas, not the Israelis.”’

So, you have to focus on the media, create the right messages, and you have to be proactive. And this is why I think you need to develop a plan to go to the West and try to show them the facts of why this war started, how did it start, and that the propaganda that Hamas and Iran are using and explaining what is not true.

ROSENBERG: You’re right about so much of the media in the West. It is extremely biased, and not just against Israel but against moderate Arab leaders who are trying to make peace. That bias is both bad and dangerous. But it is even worse here in the region. The Iranian media is at war with Israel and the moderate Arab world. So is the Turkish media. So is the Qatari TV network, Al Jazeera. So, how do we counter all that?

NUAIMI: One way to counter the hatred of hostile media is with social media, and here we are seeing some encouraging developments.

Especially in the Gulf, people here are changing their priorities. You know, 10 years ago, 20 years ago, the Palestinian cause was priority No. 1  for most people. But now, despite all the media attacks against Israel, and in favor of the Palestinians, people in the Gulf are saying, “Well, we do care about the Palestinians. We support them. We want them to get their state and we believe in the two-state solution. But that shouldn’t be our only interests. We need to focus on other things. Our national interests are No. 1.”

This is an important change. I am seeing many activists from Saudi, from the UAE, from Bahrain, even from Kuwait who responded during the recent war to those voices from Hamas and Islamic Jihad on social media. They attacked those terrorist organizations on social media and said, “You know, we do care about the Palestinians, but we don’t care about these terrorist organizations. We won’t defend terrorists.”

ROSENBERG: Are you saying that you are seeing things getting better on social media in terms of fighting back against the radical Islamists, against the jihadists, and that people are beginning to see that there is a huge difference between Hamas and regular, real, normal Palestinians?

NUAIMI: Yes, absolutely – things are getting much better. Much better.

ROSENBERG: But it can’t be enough, right?

NUAIMI: No, no, no, no, no. This is why, I think we should focus on the media, you know, to get to the heart and the mind of the Palestinian people and the Arabs throughout the region. This must be a major priority, educating people – especially young people – through social media.

NUAIMI: True. You see, when the leadership of the UAE took the decision to move forward with the Abraham Accords, they had a vision. It was not a tactical decision. It was a strategic decision, and not only for the UAE and Israel, but to change the whole region, actually.

Some people, you know, thought that these Abraham Accords were linked to the Trump administration, and that when (former U.S. President Donald) Trump left office that everything would change. No. There is no way back. Right. We are moving forward with full speed. We see the added value of having such peace initiatives and investing in each other’s countries and we are going to maintain the momentum we have started. This will benefit the whole region.

ROSENBERG: It’s very encouraging. Thank you, Dr. Ali. I deeply appreciate your friendship, your insights and your time. God bless you.