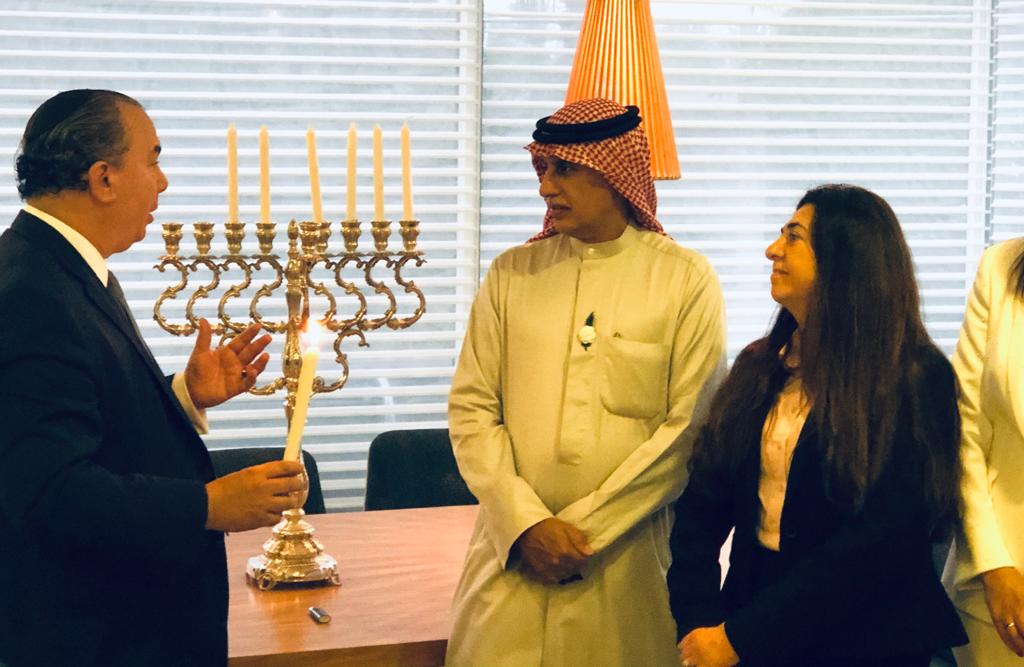 Bahraini Minister Zayed bin Rashid Alzayani celebrates Hanukkah for the first time with American Rabbi Marc Schneier and Houda Nonoo, Bahrain’s former Ambassador to the U.S., who herself is Jewish and lives in Manama. (Photo: ALL ARAB NEWS)

MANAMA, BAHRAIN — The Kingdom of Bahrain tonight launched an initiative on the sixth night of Hanukkah to invite — and welcome — American Jewish tourists to Bahrain in 2021.

The initiative was announced at an event in the capital, Manama, attended by key Bahraini and American tourism officials, tour agencies and Jewish leaders.

The event was hosted by Bahrain’s Minister of Industry, Commerce and Tourism Zayed bin Rashid Alzayani. Alzayani was recently in Jerusalem to meet with Prime Minister Benjamin Netanyahu and signed a series of agreements that will open up, for the first time, tourism between Israel and Bahrain. He told me that direct flights are expected to begin between Tel Aviv and Manama on or about Jan. 7.

Also speaking at the event was Jehad Amin, the CEO of an organization called Best of Bahrain, which encourages tourism and cultural events, as well as Dr. Nasser Ali Qaedi, the CEO of Bahrain Tourism and Exhibitions Authority.

A key player in the initiative is Ambassador Houda Nonoo, who not only served as the first female ambassador from Bahrain ever sent to the United States (serving from 2008 to 2013), but the first Jewish person to serve as an ambassador from the Arab world.

Nonoo — who joined Minister Alzayani’s recent delegation to Israel, marking her first trip to Israel, a dream of hers since childhood — recently joined the Advisory Board of ALL ARAB NEWS. Bahraini officials and American Jewish leaders signed an agreement in Manama on Dec. 15 to dramatically boost tourism to Bahrain in 2021 and beyond. (Photo: ALL ARAB NEWS)

Coordinating between the Bahraini officials and American Jewish community was Rabbi Marc Schneier who was on his 41st visit to the Kingdom of Bahrain having first traveled here in 2011 to meet King Hamad and open up relations between Bahrainis and American Jews.

The hope is that both sides will be able to develop packages that will attract American Jews not only to come and visit Israel in 2021 and beyond, but to come and spend several days seeing the history, the culture, the business climate and other attractions in this island kingdom of about 1.5 million people on the Arabian Gulf.

Alzayani recalled his three “effective and hard working days,” in Israel earlier this month. He spoke of many government and business opportunities and now it is time to explore “opportunities on the personal side and find our commonalities.”

He also called the normalization deal between Bahrain and Israel “a bold and courageous move” by King Hamad and Netanyahu.

Qaedi spoke of tourism strategies between Bahrain and Israel and the great potential that lies there.

“I think one thing that the trip to Israel taught us was the amount of really genuine passion towards creating and building a strong and fruitful relationship with each other,” he said. “The heart of any tourism strategy, it is always, obviously it is the destination, but it’s always also people. And so the warmth that we received in Israel I think cannot be underestimated.”

Having worked to promote his country as a tourist destination, Qaedi said Bahrain is a country that provides visitors with the “flavor of the Gulf” and the “hidden gem” of the region.

“This is a hybrid of cultures and societies and values that represent a unique destination and value proposition. And this is what we have to offer,” he said.

Schneier said that Hanukkah is celebrated as a time of miracles by the Jewish people.

“In the season of miracles we are grateful for the miracle workers in our midst,” he said. “As the first president of Israel Chaim Weizmann once said that miracles can happen but one has to work terribly hard work for them. There is an enormous human component … I think one of the greatest miracle workers of our generation is His Majesty the King of Bahrain.”

Schneier praised His Majesty for making his kingdom a paragon of inter-religious, interfaith, intercultural relations, one that eventually was able to make peace with the Jewish state.