Palestinian Evangelical pastor: ‘We ask Christians around the world to pray urgently and without ceasing for peace’

“Only the Prince of Peace – the Lord Jesus Christ – can bring peace to the hearts of everything in the Holy Land, to the Palestinians and to the Israelis.” 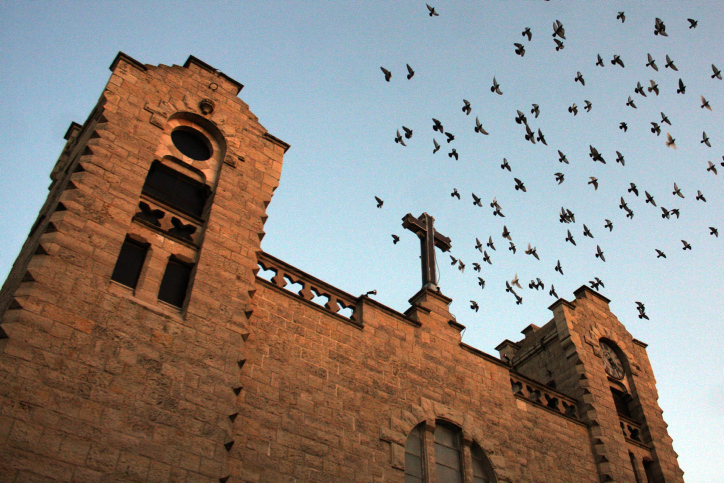 Doves fly over the cross of the Latin Church in the West Bank town of Ramallah, 21 December 2010. photo by:Issam Rimawi Flash 90

RAMALLAH, PALESTINIAN AUTHORITY – Jesus told His disciples in Matthew 5:9: “Blessed are the peacemakers, for they shall be called sons of God.”

So, in these painful days we are in prayer for peace.

We are fasting for peace.

We are lifting our eyes above, because in Psalm 121:1-2 we read, “I will lift up mine eyes unto the hills, from whence cometh my help! My help comes from the Lord, who made heaven and earth.”

Only the Prince of Peace – the Lord Jesus Christ – can bring peace to the hearts of everything in the Holy Land, to the Palestinians and to the Israelis.

This is our hope.

The children’s song goes, “The wheels on the bus go round and round.”

However, in the Holy Land the song goes, “The violence in the land goes round and round.”

Yet again, we have another cycle of violence in this land, born of historical circumstances and neglect that are coming to fruition.

So we are praying and fasting for the Lord to have mercy on us all.

We want to see peace in the land.

We pray for the war in Gaza to stop, for the rockets and the bombings to stop.

We pray that the violence between Arab citizens and Jewish citizens of Israel will stop and for both sides to come together in peace.

The current violence in the Holy Land relates to two issues coming at once.

First of all, there is an area outside the city walls in East Jerusalem called Sheikh Jarrah. It currently has about 27 Arab families living there. Their homes were given to them by Jordan when Jordan was in charge of the area. We pray that the homes in which they have lived in for the last 70 years will remain with them. A radical Israeli group is trying to force them out.

Secondly, we pray that the violence against the places of worship, both Muslim and Jewish, will stop.

It is vital that we all honor each other’s religious beliefs and protect the religious freedom of all people in the land – Christians, Jews and Muslims.

Hatred and violence has spilled over into the State of Israel, affecting Jewish and Arab citizens who normally live together in an uneasy peace.

Groups in many cities such as Lod and Haifa and other cities have had terrible riots. In Lod there is a curfew. The members of our church in the nearby city of Ramla dare not leave their homes at times due to the rockets and communal violence. Cars and homes have been damaged and destroyed.

The violence in the land goes round and round.

What can we do?

First, we must recognize that the situation is Gaza is terrible. The unemployment rate there is 82%. The people of Gaza have terrible living conditions. As of today, 122 people have been killed in the current bombing raids in Gaza. Acts like this are what has fueled the rise of Hamas. The world must do something for the people of Gaza.

Second, mutual recognition of all groups, religions and ethnicities must be fostered in Israel. The government and society must be fair to both the Arab citizens – Muslim and Christian – and Jewish citizens.

Third, Arabs and Jews must sign a peace agreement based on justice and each live in his area. We need to demand that the leaders of the world address the problems and work for an equitable solution. If we don’t solve the issues now, we can look forward to another deadlier cycle of violence in the future. Otherwise, there will be no calm or quiet in the valley of the Holy Land for Jews and Palestinians.

Fourth and most important, we need Christians around the world to pray urgently and without ceasing for the peace of Jerusalem and all of the Holy Land, as commanded in Psalm 122:6.

Above all, this is a spiritual battle.

Evil forces are seeking to rob, kill and destroy the lives and property and futures of the people in this precious and beautiful Land.

Only the sovereign God of the universe can and will bring peace.

And He will only do so through His Son, the Lord Jesus Christ, and the prayers of His people.

As Jesus said in John 10:10, “The thief comes only to steal and kill and destroy. I came that they may have life and have it abundantly.”

Let us turn our eyes and hearts to the Giver of life.