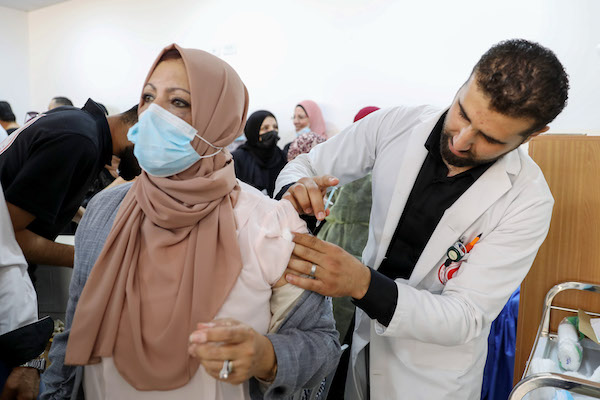 No sooner had Israel announced it was transferring more than 1 million COVID vaccines to the Palestinian Authority than the PA rejected the shipment and canceled the deal.

According to the deal, new Israeli Prime Minister Naftali Bennett – less than one week on the job – agreed to give Israel’s stored doses of the Pfizer vaccine to the PA. The deal was lauded as a humanitarian gesture, with Bennett credited for showing compassion towards Israel’s Palestinian neighbors.

But the transfer wasn’t as much of a donation as it was an advance. In exchange, Israel was supposed to receive an equal number of doses from the PA in return when they received their new shipment of allotted vaccine doses from Pfizer later this year.

All seemed to be going according to plan, until the PA received the first batch of the agreed-upon 100,000 vaccine doses from Israel.

Soon after the deal was confirmed, a wave of anger and heavy criticism was posted by Palestinian influencers on social media, arguing that the PA should never have accepted the vaccine from Israel.

“We can buy vaccines ourselves, and we do not need Israel,” said a Fatah official who spoke on the condition of anonymity to discuss the sensitive matter.

He said the announcement might have cost the already deeply unpopular authority more legitimacy in its vaccine campaign.

In addition, there were accusations by Palestinians that the PA should not have accepted “subpar” vaccines because they were due to expire as early as June and might not be as effective.

There were also rumors circulating on social media that Israel, in cooperation with the PA, had been trying to “poison” Palestinians with expired doses.

In fact, since Pfizer requires two shots spaced three weeks apart, most of the rollout would have required using the expired products.

The deal was actually supposed to go through earlier, during former Prime Minister Benjamin Netanyahu’s terms, but The Jerusalem Post contends that government officials were “still biding their time and concerned about not forming a government.”

“Like other things, such as the second flag march last week, the vaccination deal was pushed aside. The deal with Ramallah appears cynical, with Israel set to receive doses from Pfizer in September and October in lieu of the ones it wanted to now dump on Ramallah,” the report said.

After an outcry from Palestinians saying they would refuse to take the vaccines, Prime Minister Mohammad Shtayyeh announced the PA was canceling the deal because the doses were near the expiry date and did not meet required health standards.

For its part, Israel has since clarified that the terms of the original agreement included both the quantity and expiry dates of the vaccines. Israel said it didn’t need the aging stock of vaccines and that the PA had approved the deal “in order to speed up the vaccination program” in the occupied West Bank and Gaza.

In addition, Israel’s new health minister, Nitzan Horowitz, said on Friday – prior to the PA calling off the swap – that the “coronavirus knows no borders and does not differentiate between people” adding that the “important exchange of vaccines” was in the interests of both sides and that he hoped for “cooperation between Israel and its Palestinian neighbors in other areas.”

In an unexpected development, Palestinian opposition activist groups are calling for an independent investigation into the deal and its co-signers, saying that the PA should take responsibility for the “vaccine scandal,” as they call it. These groups are accusing the PA of agreeing to give their population an expired vaccine and, if it were not for their efforts, the PA “would have initiated a vaccination campaign using these doses without the public’s knowledge.”

However, PA Health Minister Mai al-Kaila said in a press conference, “They told us the expiration date was in July or August, which would allow lots of time for use. But [the expiration] turned out to be in June. That’s not enough time to use them, so we rejected them.”

Israel stated that the vaccines are “identical in every way to the vaccines currently being given to citizens of Israel.”

However, al-Kaila claims that Israel was responsible for delaying the deal by demanding certain conditions and is to blame for the situation.

According to al-Kaila, Israel had held up the agreement by negotiating certain conditions, for example that no vaccine doses would go to Palestinians in the Gaza Strip, which is ruled by the Hamas terror group.

“After the Israeli side stalled and the delivery of the vaccines was delayed until the day before yesterday, their expiration date neared, so we refused to accept them,” she said.

There are other Palestinians who want their government to respond to the urgent health needs of the population and put nationalistic ideologies aside. Some say that the vaccine could be used to save lives.

The PA has struggled to vaccinate their public, with the Palestinians suffering their worst wave of the coronavirus in March and April, which peaked at nearly 3,000 new cases each day.

Al-Kaila said on Sunday that Ramallah has an agreement with Pfizer to receive nearly 1.8 million vaccine doses between July and September and another 2 million doses between October and December of this year, however she said, because of global demand, the shipments are not expected to arrive on time.

In another recent development, three countries have requested to receive the vaccine doses that the PA rejected.