Protestors attack Jerusalem mufti, kick him out of mosque during his Friday sermon while chanting Hamas slogans

Does the attack underscore the rise of Hamas in Jerusalem – and the weakening of the Palestinian Authority? 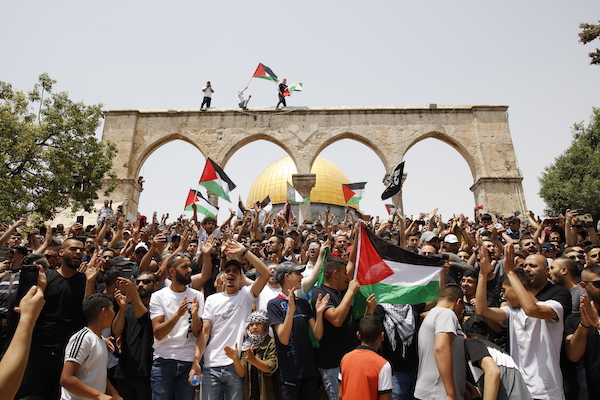 Palestinians protest at the al-Aqsa Mosque compound in the Old City of Jerusalem during the Friday prayer on May 21, 2021. (Photo: Suliman Khader/Flash90)

Muslims attending prayers at al-Aqsa Mosque attacked the Grand Mufti of Jerusalem on Friday in the middle of his sermon, throwing bottles at him and eventually expelling the imam from Haram al-Sharif.

Senior Hamas members led the charge against Sheikh Mohammed Hussein, justifying the attack because the mufti did not praise Hamas for its victory against Israel after an 11-day conflict that left more than 200 Palestinians in Gaza and 13 Israelis dead.

Hamas and Israel agreed to a ceasefire on Friday beginning at 2 a.m. Since then, Hamas has declared victory and has been accusing Palestinians who disagree of treason.

The incident at al-Aqsa was driven by Hamas leaders and supporters against the Fatah-led Palestinian Authority and Hussein, who is considered the PA representative at Haram al-Sharif.

The unprecedented attack possibly confirms the worst fears of the PA – that Hamas has risen to power in Jerusalem, surpassing the authority of the PA in the city. Protestors chanted, “We are the men of Mohammed Deif,” a Hamas military leader, and “Go away, go away, we don’t want to see the dogs of the Palestinian Authority.”

The Hamas protests were not isolated to Jerusalem. In Ramallah, Hamas operatives swore against the late PLO leader Yasser Arafat in a demonstration at the city center celebrating Hamas’ victory.

Since Friday, the warfront shifted from the Gaza border back to Jerusalem where it began several weeks ago during Ramadan clashes at Damascus Gate. Palestinians again clashed with Israeli police during a celebration of their “victory.” More than 30 Palestinians were arrested on various charges, including assaulting police officers on the Temple Mount and in East Jerusalem.

The PA condemned the attack on Hussein and praised him for his “defense” against Israeli “aggression” at the mosque. PA Prime Minister Mohammad Shtayyeh called the attack an “assault on the holy sites and national unity.”

Meanwhile, Haram al-Sharif – referred to by Israelis as the Temple Mount – was reopened to Jewish visitors today after having been closed to non-Muslims since May 4 during Ramadan – a move that detracts from the Hamas claims of victory.

Right-wing politicians demanded that Jews gain access to the Temple Mount immediately after the ceasefire.

“At seven o’clock tomorrow, Jews must be allowed access to the Temple Mount — the closure of the site means that Israel has surrendered to Hamas,” said Itamar Ben Gvir, an activist and Knesset member with the Religious Zionism party.

Several groups ascended to the site today. Non-Muslims are barred from praying or reading Bibles and prayer books while visiting, according to the status quo rules in effect.