Family of Nizar Banat says he was beaten severely, Palestinian protestors call for “the overthrow of the regime” 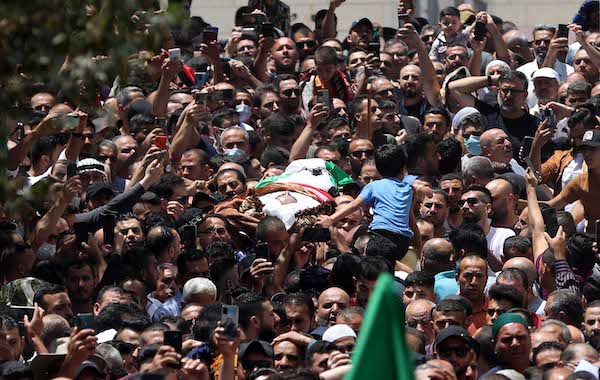 Mourners carry the body of Palestinian human rights activist Nizar Banat who died a short time after being arrested by Palestinian Authority, in the West Bank city of Hebron, on June 25, 2021. (Photo: Wisam Hashlamoun/Flash90)

Tens of thousands of Palestinians gathered in the West Bank on Friday to attend the funeral of political activist Nizar Banat, 43, who was beaten and arrested in his Hebron home by Palestinian Authority security services in the early morning hours on Wednesday.

“People here are incredibly angry at the Palestinian Authority,” said a reporter from Al Jazeera News on location. “They are calling for the downfall of the regime.”

Well-known for his strong opposition and outspoken criticism of the PA and Abbas, Banat’s relatives say a home raid took place around 3:30 a.m. on Wednesday when more than two dozen PA officers tore down the door of the house and began beating Banat with iron batons while he slept, before stripping him naked, using pepper spray to neutralize him and then continued to violently beat him before taking him into custody.

Anti-corruption activist Fadi Elsalameen tweeted, “The Palestinian Authority kills Nizar Banat, a human rights activist, a critic of Mahmoud Abbas, and a parliament candidate in the recently canceled elections. The only reason they killed him is his outspoken criticism of the PA’s corruption.”

In a statement to the press, Hebron Governor Jibrin al-Bakri told reporters that PA security forces were instructed to enter the house where Banat was hiding on Wednesday morning with a warrant for his arrest.

“Following a memorandum and a summons from the Public Prosecution to arrest the citizen Nizar Khalil Muhammad Banat at dawn today, security service forces came to arrest him, and during the incident his health deteriorated, and he was immediately transferred to the Hebron Governmental Hospital. He was examined by doctors where it was found that the aforementioned citizen is dead, and immediately the Public Prosecution was informed and began its procedures in accordance with the rules.”

However, forensic pathologist Dr. Samir Abu Zaarour, from the Independent Commission for Human Rights (ICHR) performed the autopsy and said the death was “unnatural,” and not found to be caused by a heart attack or stroke. The family released photos of the body which showed heavy bruising on his face, head and legs.

According to reports, Banat had been arrested and imprisoned several times in the past – each time for several months – because of his political opinions and his stance against corruption in the PA. Banat had 100,000 followers subscribed to his Facebook page where he was actively speaking out against the PA for its growing authoritarianism and human rights violations.

Just hours after Banat’s death, hundreds of Palestinians gathered in the West Bank city of Ramallah to protest his murder in the streets and calling for the downfall of the regime. The chants of “traitors, traitors” directed at the PA officers, could be heard, while others called for Abbas’ resignation: “Abbas, you are not one of us, take your dogs and leave!”

Banat was a former member of the Fatah movement and was listed as a candidate with the independent party, Freedom and Dignity, in the recent legislative election scheduled for May 22. However, in April, as the day approached, Abbas cancelled the election – which would have been the first time Palestinians headed to the polls in 15 years.

Banat condemned the Fatah party for cancelling the election and called for the European Union to stop giving financial support to Abbas and the PA, who then accused Banat of cooperating with Israel. A few days later, gunmen arrived and fired at his house.

In a recent video, Banat had criticized a deal between the PA and Israel to transfer 1.4 million soon-to-expire Pfizer vaccines in Israeli hands to the PA. In exchange, Ramallah would send its later shipment of new vaccines to Israel.

The news of Banat’s death attracted plenty of international attention, with the U.S., UN and EU calling for the PA to conduct a “transparent” inquiry into the incident.

The EU issued this statement: “Shocked and saddened by the death of activist and former legislative candidate Nizar Banat, following his arrest by Palestinian security forces last night, and we call for an immediate full, independent and transparent investigation.”

The Representative Office of Canada to the PA responding with, “Shock and deep sadness at the death of Nizar Banat, a prominent Palestinian political activist and critic of the Palestinian Authority, after he was arrested by the Palestinian security forces. We strongly support freedom of expression and a safe space for political figures and members of civil society who must be protected.”

The U.S. government-issued statement read: “We urge the Palestinian Authority to conduct a thorough and transparent investigation and to ensure full accountability in this case.  We have serious concerns about Palestinian Authority restrictions on the exercise of freedom of expression by Palestinians and harassment of civil society activists and organizations.”