UAE legislator in Newsweek op-ed: Gaza is not occupied by Israel, it is occupied by Hamas 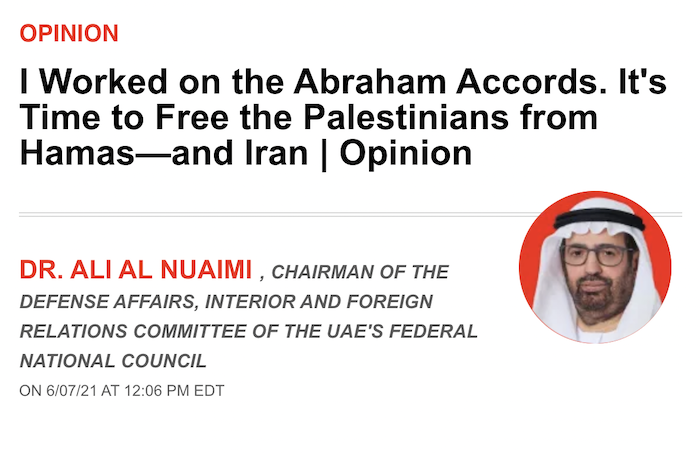 The Abraham Accords survived its first challenge – the 11-day conflict between Israel and Hamas – and it will stand the test of time because it serves to benefit the entire region – including Palestinians who are suffering under the Iranian-backed Hamas terror regime.

In an editorial for Newsweek magazine published on Monday, Dr. Ali al Nuaimi – one of the architects of the historic peace treaty between Israel and the Muslim Gulf state – writes that the true source of the region’s woes is Iran, not the Israel-Palestinian conflict.

“The Abraham Accords are not about an Emirati and Israeli future but the whole region’s future. The truth is, the Middle East conflict isn’t between the Israelis and Palestinians but between Israel and Iran,” he wrote. “Ask yourself who benefits from this conflict? The Palestinian people’s rights and hopes have been hijacked by Hamas to serve an Iranian agenda.”

“And it is against Iran’s extremism that we must continue to fight,” he said.

Nuaimi made similar comments to ALL ARAB NEWS Editor-in-Chief Joel Rosenberg in an exclusive interview in Dubai last week. He said that the 4,300 rockets fired by Hamas at Israel were an attempt to blow up the Abraham Accords and halt normalization efforts in the region.

Nuaimi is chairman of Hedayah, the International Center of Excellence for Countering Violent Extremism, and a member of the UAE Federal National Council, and chairman of the Defense Affairs, Interior and Foreign Affairs Committee at the Council.

In his Newsweek op-ed, Nuaimi noted that the “bold, courageous” Abraham Accords were written “with a strategic vision not only for the UAE but for the whole region.”

“The people of the region are craving change, not least among them the Palestinian people, who are desperate for fresh leaders, leaders who can move beyond a rigid regime with an agenda that abuses the very people it rules.”

Nuaimi rightfully points out that Israel lost the propaganda war in the May conflict when narratives shifted against Israel as the dominant power against the oppressed Palestinians.

“One of the biggest errors in this narrative, which I saw repeated over and over in the media, was the way they speak about Gaza as if it’s occupied by the Israelis.”

“It’s not: It’s occupied by Hamas. And the Palestinian people in Gaza are suffering because of Hamas, not the Israelis.”

“Unfortunately, though the propaganda of Hamas and Iran is not true, to the world, it is now dominant.”

That being said, there has been a shift in the Emiratis’ approach to the situation – a recognition and rejection of the influence of the terror groups in the region which serves Iran.

“Twenty years ago, the Palestinian cause was priority number one in the region. Now, people in the Gulf see things differently. We still care. We still support the Palestinians. We believe in the two-state solution,” he wrote. “But people in the Gulf no longer believe that this should come at the expense of our national interest. Many activists responded to Hamas- and Jihad- influenced media and social media posts to say, we do care about the Palestinians – but we don’t care about these terrorist organizations.”

“Hamas and the Palestinian leadership have hijacked the minds of 2 million Palestinians to sell their political and terrorist agendas. We want the Palestinian people to enjoy what we enjoy, to have what we have and create a better future for a new generation. But we have to do this together, with all the stakeholders in the region, from NGOs to schools, religious leaders and governments. We cannot do this alone.”

Nuaimi said the treaty will survive because its longevity is not connected to a single American administration.

“There is no going back. We move forward with full speed and have already seen the added value of having such initiatives, not only for the UAE and Israel but for the whole region.”

Here is a link to the full article.